You know that Your Survival Guy wants you to live a Liberty Retirement. That means paying the fewest of your hard-earned retirement dollars possible to a government that wants to spend them on politicians’ pet projects. In 2022, ten states have worked to lower the burden on retirees. Jackson Brainerd of the NCSL lists their actions:

Seniors are moving from high‐​tax to low‐​tax states, as shown in the chart. On the horizontal axis is the sum of state and local sales, property, and individual income taxes as a percentage of income in 2019. On the vertical axis is the ratio of in‐​migration to out‐​migration for households age 65 and older, based on IRS data for 2020. The ratio is above one for states enjoying net in‐​migration and below one for states suffering net out‐​migration. Each state is a dot. 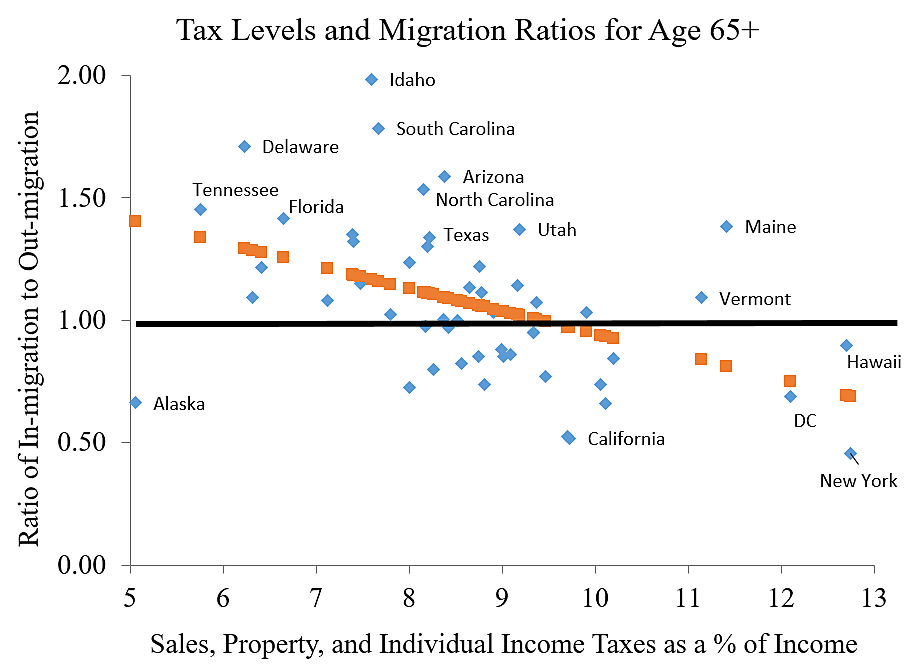 I would rather that states cut overall tax rates than just cutting taxes for favored groups. But for seniors, policymakers across the political spectrum see the need for their states to stay competitive. In Maryland, Governor Larry Hogan said, “Our state’s sky‐​high retirement taxes remain the one area where we are still not effectively competing with other states.” In Connecticut, Governor Ned Lamont said, “We’re also going to eliminate the income tax on pension and 401(k) income for most households. Stay in Connecticut and watch your grandkids grow up in your living room rather than waving to them from a Zoom room in Delray, Florida.” Both governors followed through this year and cut taxes on retirees.

Action Line: A Liberty Retirement doesn’t come to just everyone. You have to work hard for it. Save ’til it hurts, and have a plan. You are the most important part of that plan, but you may need help. If you need help building a plan for a Liberty Retirement, click here to get in touch with me. I’d love to talk to you.